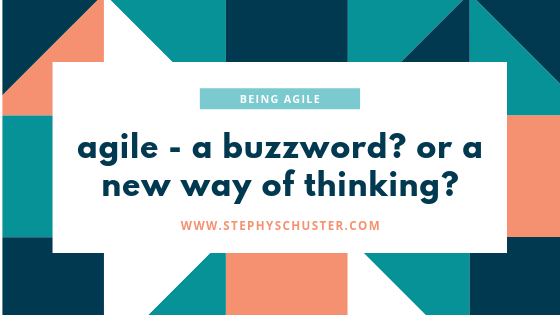 By Stephanie Schuster
In Uncategorized

Following is a definition for “agility” by Britta Redmann, which I find both apt and clear:
“In my understand, agility is the ability of an enterprise or an organisation to perceive changes in the surrounding world and to adapt quickly and flexibly to these changes, and to recognise opportunities, potentials and also risks and to adapt one’s actions again and again accordingly.”

The here-listed attributes are more than helpful for all those who consciously and with self-guidance accept and deal with the challenges of our times. The speed of change we are confronted with increases; therefore, it is even more important that we are able to make quick decisions.

To have clarity about the goals one wishes to achieve in life is a good precondition. In an agile work environment, decisions must be made quickly, without having to deal with long vertical hierarchies. We talk about fulfilling one’s role and not about getting a job done. People with a distinct ability for self-management can accomplish such tasks. Imagine the kind of society we would be living in today if this were the result of our education system.

However, let us take a step back now. We assume that people who practise agility in their life are able to perceive change. Certainly, many will assert that they apply this ability in their own personal lives although they do not consider themselves “agile”.
The decisive difference is how people deal with change. Most people react to change with fear, or at least with concern. This usually occurs because they lack a picture/image of the “New”.
For example, if an organisation transitions from a classical project management method (e.g. waterfall) to an agile project management, the participants often lack the picture/image as to how this new agile organisation is supposed to function, which leads to uncertainty.
Since many people are inexperienced in dealing with uncertainty while at the same time seeking certainty in all areas, they are overcome by concern and even fear. In contrast, the expectation in an agile environment is different – and it is so for a good reason. If we remain in fear and anxiety, the creative centre in our brain is blocked, and consequently we do not perform to our full potential. Secondly, we spend far too much time on things we cannot change; thus we lose our effectivity and focus. This is one of the main phenomena in the context of transformation: loss of friction and subsequent decline in effectivity.

If teams are more occupied with the surrounding “disquiet”, instead of maintaining a 100% focus on the tasks, the effectivity of the entire organisation will decline. This is true both for larger teams and for each individual person. Even if such an occurrence and condition cannot be avoided entirely, it should remain as short as possible and penetrate as little as possible. The art of dealing with uncertainty can be learned. The better a person is at self-management, the better he/she can deal with uncertainty. People who acquire this ability, i.e. who actively work on their self-development, are often referred to as “mature” personalities. We are impressed by the peace, calmness and confidence they radiate.

They appear unshaken by their surroundings. This comes as a result of personal development, which can be achieved by everyone. These qualities of leadership personalities are what we would like to see.

The first person I always need to lead is myself. It means that first I have to be able to provide the best leadership for myself before offering it to others. Many times others will follow such leaders automatically because they are attracted by such a personality; they feel “safe” with them, and they want to learn from such leaders. Since we do not talk about assessment here, these steps of self-development are referred to as later steps. There is no right or wrong mind-set.
One important factor is to have or develop the suitable mind-set for a respective position. The precondition for this is openness and willingness to develop. An agile working environment desires or requires personalities with advanced self-development.
Self-organised teams, in particular, require people who are at an advanced level and can lead and organise themselves well. The agile working method promises increased effectivity, based on good organisation and motivation, which begins with each individual person.
Various models for self-development exist, such as those by Jane Loevinger or Lawrence Kohlberg. However, I will not go into detail here. All models have one factor in common: with increasing self-development the ego is “tamed”, and during the process, the ego’s push to the fore steadily decreases. A scrum master with a personality of a later level will be able to help more efficiently. People with a mature personality can easily put aside their own ego for the sake of the larger picture. This makes working with them so pleasant.

“Being agile” therefore means that one is at a later level of self-development. All of this comes with competencies, such as decision-making ability, decision-making power accompanied by a clear vision and knowledge of how to achieve the goal. They pursue their objectives with focus, acting consciously, contrary to uncontrolled reactions. Particularly in times of stress, it is difficult for many to act with calm and composure; instead they react habitually and without awareness.

How can agility be achieved? The method towards this objective is mind-set training. It is a matter of understanding certain contexts and how our thinking and emotions influence our actions. The good news is that anyone can decide at any time to acquire the attributes and attitudes he/she desires. The second step is to enable concrete actions for the respective situation to be defined, which then need to be implemented.

Almost all our actions are based on habits; scientists tell us that 96%-98% of our actions are habitual. A good first step is to observe oneself while being honest with oneself.
What is my thinking in this or that situation?
What does it do to me?
Do I get into such situations again and again?
What is my contribution to it?
Consider the example of the company I work for when it announces a new reorganisation. Many employees react with worry causing them to be receptive to information which is unhelpful for focusing on the tasks in the company. This leads to “disquiet” in the organisation, and consequently effectivity declines. This helps no one, neither the company nor the employees. This “disquiet” often manifests itself in conversations about issues that cannot be changed or influenced by the participants – in short, people gossip.

Persons who already have achieved an advanced level of self-development will not get involved in such conversations. They would rather answer in the following way: “That is interesting! Have you heard that the weekend weather will be great again?”
These people indicate in an appreciative manner that they are not available for such conversations, and they continue to focus on their tasks. Imagine all participants in an organisation were acting in this way. How fast, focused and effective would the organisation progress through the transformation?

The key is consistent implementation. Every person who is used to turning to this kind of conversation based on previous experience will find it difficult not to do so in this case. This occurs because habits are very strong, and lie dormant in our subconscious mind.
The important point is to replace these unhelpful habits with positive ones. The concept of a paradigm shift requires relearning, which is truly mind acrobatics and requires continuity and endurance. However, the effort pays off – the result of consistently good habits represents a quantum leap forward in all life circumstances.
Besides the conscious decision to work on myself, it is also necessary to deal with personal development and to implement ideas. This shows that agile working methods are supported by an agile mind-set. An agile mind-set means that one is at a later stage of personal development. Such a person is able to put aside his/her own ego and assess which value one can contribute in the given situation.

This is particularly important for self-guided teams. A team that is composed of people who can lead themselves and are at an advanced level regarding their personal development is more effective than a team that is composed of those who are primarily guided by their own ego. The former have been well trained in acquiring self-management competences, which makes them focused and consequently also effective.

What is true for a team is also true for a very large team, namely our society.
Therefore, my thesis is that the agile mind-set is good for everyone. In my view, it is not limited to agile transformation. Rather, it is a philosophy, a thinking logic.
Who would want to think differently in his/her work from the way he/she thinks at home?